At the Club Room (for Simon H. Fell) 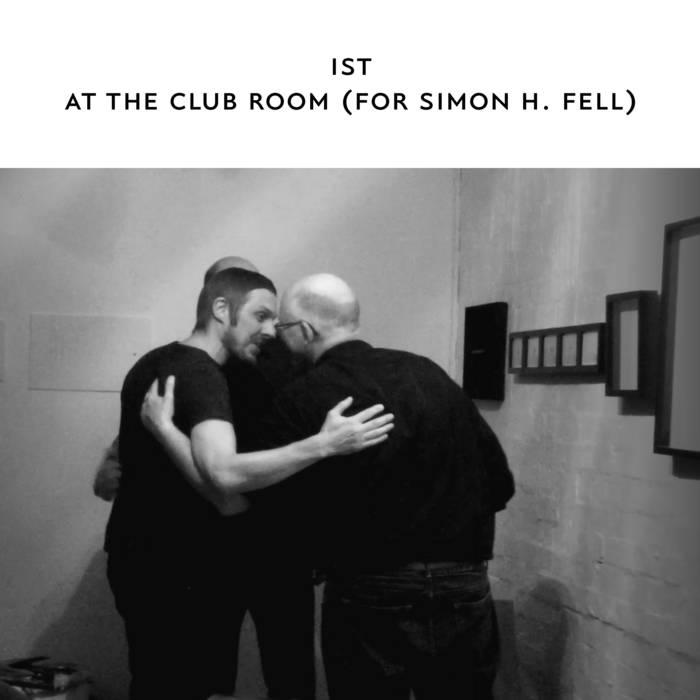 sven thomas nordlöf A very very beautiful recordings and release in memorial of a sensitive musician! Many thanks and bkesses

I’m deeply honoured to be able to release this music as a tribute to Simon and to formally mark the day of his funeral ceremony - 6th July 2020 - taking place in his beloved home village of St. Dizier-Leyrenne in rural France.

All proceeds raised from this album will be sent to his wife Jo.

IST made wonderful music together, plain and simple. Brought together by Simon H. Fell in December 1995 for an initial rehearsal, we three gave our debut concert at Club Orange in Kentish Town on the 23rd April 1996 followed by this, our second gig, a couple of months later at the Club Room in Islington on the 18th July. The Club Room was a tiny space with a comfortable capacity for about 20 people. The concert series was curated by John Russell, Richard Sanderson and Mike Walter on weekly Thursday evenings and played a vital part in the network of small performance spaces peppered throughout London in that period. I recorded the music we made that night and some months later gave a cassette copy to Liam Stefani and he proposed including a track on a compilation disc he was planning for his label scatter. This subsequently never happened but thankfully Liam held on to the cassette and upon hearing of the untimely passing of Simon, got in touch and suggested transferring it to digital for me to hear again, twenty four years having past since it was committed to tape. (Mark Wastell - 4th July 2020)

That Simon H Fell was a member of the chamber improv trio IST - an important part in the development of the "New London Silence" is quite surprising - a hugely energetic player, who seemed to be trying to get as many sounds out of his double bass as possible and all of them simultaneously, more familiar to us at the time as the bassist in the fantastically fiery Hession/Wilkinson/Fell whose free jazz inspired onslaught got them bracketed as "punk jazz". Simon seemed an unlikely fit for a music of stillness and restraint.

These recently unearthed recordings, nearly a quarter of a century old, of a performance (their first) at the Club Room, a small Islington venue curated by John Russell, Mike Walter and myself, tell a different story, and fill in a gap in the history of this, esoteric and under documented music.

IST presented a very different visual to most of the groups at The Club Room, no drums, no brass...but a lot of wood, not only the harp, double bass and cello, but also the little tables each player had, each with an array of small objects to play and alter the strings with. The most noticeable thing was Rhodri's harp - not the portable lap harp he tends to use now, but a huge full concert pedal harp, that we somehow managed to get upstairs into the cramped little room.

The music itself was intense, demanding of attention, and at this time especially, extraordinarily original. The three musicians effortlessly moving from small pointilistic gestures, to arco passages with all players employing bows. Silences hung in the air, as the musicians hovered over their instruments in concentration. The venue itself was not very sympathetic to these sounds -carpeted and acoustically dead, with passing cars and a noisy bar downstairs, yet like the best of this kind of music, it seems to create it's own bubble of silence enclosing the musicians, and the inevitably small audience.

Of course this style, as it was developed by these and other musicians later, become more refined and rarified...what is striking about this music here is not only the silences but also the unison playing that actually achieved some volume and relatively frantic activity! For example near the end of the first set where Rhodri's harp for the first time starts to sound like a harp, with sweeps around the strings as the two bowed instruments soar upwards to a conclusion.

Confront and scatter are releasing this recording as a tribute to Simon following his untimely death. For me it brings back personal memories of a very exciting time as groups of younger musicians discovered the delights of freely improvised music. Both Rhodri and Mark have spoken about how Simon, as an encourager and enabler as well as a supremely adaptable and versatile performer, persuaded them to play in this context. With one musician coming from classical music, the other largely self taught, Simon was the bridge that made them work together so well. The group probably got less than a tenner between them for this gig, but that didn't matter especially, we knew what was happening was not only fun and exciting, but important. I was glad to be there to help it happen, and I'm delighted that this music, despite the sad circumstances, can be heard. (Richard Sanderson - 5th July 2020)

Recorded by Mark Wastell at the Club Room, Islington, London on the 18th July 1996
Digital transfer from cassette by Liam Stefani
Mastered by Jamie Grier
Co-released by Confront Recordings and scatter

Photo by Sergio Amadori taken at the Hundred Years Gallery, London on 24th September 2016. IST played the final set of the Confront Recordings twentieth anniversary celebrations and was the last time all three members were together.