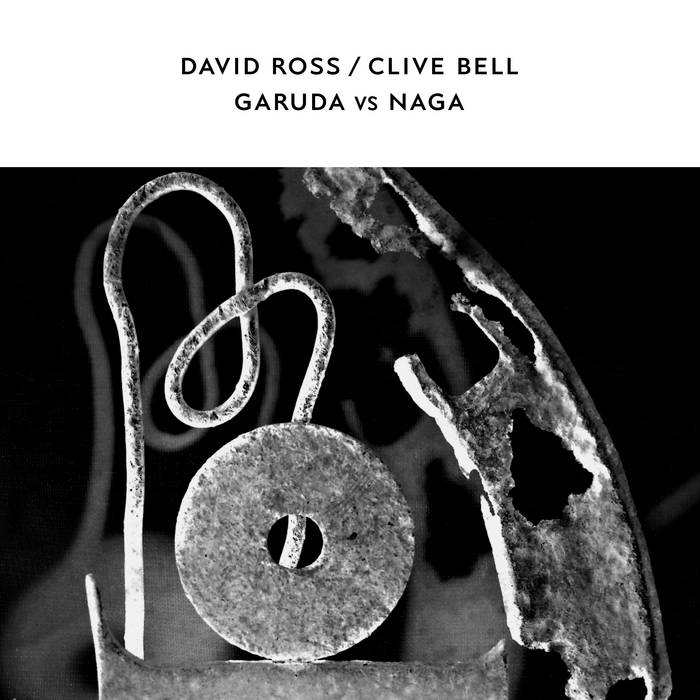 The name refers to the eternal and persistent tussle between two fantastical creatures from Hindu mythology and also reflects something about how the record was made.

Five improvisations were recorded: four of Clive playing solo shakuhachi or pi saw reed flute in the studio, plus a duet with myself on Bontempi organ, recorded at St Mary’s, Surlingham - an atmospheric Norman round tower church, that I live next door to in Norfolk.

I then used these recordings to generate responses from a modular synthesiser, using an interface that converts audio into control voltage signals. In this way, the pre-recorded material also served as the primary CV source to my analogue system.

The modulating amplitude of the audio signal produced a continually variable control voltage which was then processed and re-distributed through a network of oscillators, percussion modules, resonating filters, feedback generators and effects.

You can hear how the contour of Clive's breath and phrasing cause rhythm and tempo to modulate and because of the patch design, also change internal structure. These outcomes initiate further multiple cascading events, expressed as changes in note duration, pitch modulation, delay time and feedback generation. All of these elements evolve in direct relation to both subtle and dramatic dynamic changes of volume in the source audio. Parts of the system were sensitised to respond to increases in amplitude while others speak most loudly in the silences. The result is that the two elements (pre-recorded audio and audio-generated electronics), become inextricably intertwined, just like the fates of Garuda and Naga.

My plan was to let the audio and patch design interact without intervention, but I couldn't resist trying to influence the direction of the music. My responses, unlike that of the synthesiser were emotional. The five pieces that comprise the finished work preserve the musical form of the original improvisations in their entirety. The 'electroacoustic' part of the process was also performed as a real-time improvisation and cut live to stereo without editing.

Clive Bell plays on two flutes for Garuda vs Naga. One is the Japanese bamboo shakuhachi, his usual principal instrument, which he studied in Japan with Kohachiro Miyata. The other, also bamboo, is a little known free reed flute from north Thailand called the pi saw. The sound is produced by blowing against a metal reed, very similar to a harmonica or accordion reed. In fact the accordion was developed from this family of ancient Asian instruments, which have been played in the far east for over a millennium. (David Ross)